Click here to order now, or read more about the project below.

My first professional conducting appointment was with the Air Force Strings, part of The US Air Force Band and Orchestra in Washington, DC.

That string orchestra is comprised of some of the nation’s finest players, graduating from institutions like Juilliard, Curtis, the Colburn School and other leading music schools. They are dynamite players, and their work when I was there was 75% as strolling musicians — the Strolling Strings, as they are fondly called — 20% quartet work, and about 5% of the time they sat down to play as a string orchestra. When it came to ‘classical’ ensemble performance…they just didn’t do it very often.

Before I was appointed as their conductor, I was producing their recording session of string orchestra music, and it wasn’t as good as it could be with the caliber of players they employed. After the first round of edits, I recommended to the music director that we not release the recording. The next thing I knew, I was in charge of the orchestra.

Thanks to outstanding teachers, J.S. Bach‘s music has always been a constant in my life. Two-part inventions, preludes and fugues, and partitas made up my keyboard studies; motets and chorales were a part of my church choir upbringing; I studied the Passions in my master’s degree; and the four-part chorales and the Art of the Fugue continue to be part of my daily keyboard workout as a conductor.

Bach’s music is of the finest craftsmanship. Each voice part is perfect by itself, and the way each part interacts with other voices is the model for 18th-Century counterpoint. Simply put, J.S. Bach’s music is the bible (or at least the Old Testament) for the study of tonal harmony.

As I took this new appointment as the conductor of the Air Force Strings, I made two decisions: 1) we would rehearse as a string orchestra every day, and 2) that we would play Bach’s chorales so that we could focus on increasing the ensemble’s unity.

Before every rehearsal, I would pick out a page from the Riemenschneider edition of Bach’s 371 Harmonized Chorales. We would play the chorales in four parts, sing our parts, invert parts, play single lines together…any idea I could imagine they went along with me.

In retrospect, I realize that these players only tolerated my decisions because of the military construct – I was an officer and my decision was as good as an order. But I was naive and didn’t see it that way. I thought, “Here’s a good idea, let’s do it,” and that they wanted to follow. My decision was a high-school music director’s approach for a professional ensemble. I don’t think a professional orchestra would tolerate this, but because of the military construct, I got naively away with this. For this, I thank my colleagues for their patience and good nature.

Well, gosh darn it, it worked! The orchestra got better, and they knew it! My conducting teacher at Eastman, Neil Varon, always said, “You know you’ve done your job as a conductor when the orchestra hears that they’re getting better.” A few months later we went to tackle a recording session and the results were outstanding. Listen for yourself by clicking on the link to right.

“You know you’ve done your job as a conductor when the orchestra hears that they’re getting better.”

There were many things I took for granted with this group, but the most basic was that all players could read from a piano score.

Fast forward seven years and I had a college orchestra of my own that I knew would benefit from playing Bach chorales. When I brought a piano score to the string orchestra rehearsal and assigned parts, my violists said, “We don’t have a part.” Of course they had a part, but it wasn’t in alto clef.

Well, the first thing I needed to solve was creating a part for the violas, so I opened up Finale and started to enter in the alto line…or should it be the tenor line? Why not all of the lines – soprano/alto/tenor/bass – just like the piano score? And that’s what I did…first for the violas, and then for violins and celli/basses, and then for the winds and brasses.

Here is a PDF sample of what a full score looks like:

Now, I begin nearly every rehearsal with Bach – it might be five minutes, or it might be thirty. We sing, we transpose, we play outer voices only, we switch parts at fermati, we play only the chorale tune in unison…the possibilities are great, and the musical rewards are even greater. Our orchestra functions as a choir, fully aware of how their part fits within the greater whole. They hear better, they think more musically, and they understand the chorale with the same perspective as a conductor.

With a generous grant from my employer, Augustana University, I set a number of these chorales, using the most scholarly resources for source material. I submitted a proposal to GIA Publications, and they were kind enough to publish my work in a series we’ve titled The Bach Initiative: Flexible Chorales for Ensemble Musicianship.

This first edition of The Bach Initiative contains twenty-six chorales, and copies are available in a the following formats:

While these chorales will undoubtedly be of great pedagogical use in secondary schools, university, community and professional instrumental ensembles will find various applications for rehearsal and performance. Chamber ensembles, like a string quartet, or brass quintet will find use for these chorales in providing music for worship and ceremonies; studio ensembles like horn choir or tuba-euphonium ensemble need quality repertoire, and it doesn’t get better than J.S. Bach.

I’ll be traveling around the country to promote The Bach Initiative, and would be delighted to come visit with your ensemble and demonstrate the various ways you can use these chorales to enhance your ensemble’s musicianship.

Vince Lombardi is attributed with saying, “Practice doesn’t make perfect.  Perfect practice makes perfect.”  Everybody knows that we need to practice to get better, but how should one practice?    END_OF_DOCUMENT_TOKEN_TO_BE_REPLACED

Have you ever seen a conductor sit at the piano and play fluently off an open score?  It’s impressive, for sure, but wouldn’t it be invaluable for your own studying purposes to be able to do that too?

END_OF_DOCUMENT_TOKEN_TO_BE_REPLACED One of the questions I asked most frequently in the beginning of my conducting study was, “How do I study a score?”  I never got a straight answer (because there isn’t one), and my question morphed into many more:

The beautiful part of this is the more you learn, the less you realize you know.

While searching for answers is the way we learn, I decided to draft up something a little more practical – a one page document that doesn’t give all the answers, but it does offer a good place for a young conductor to start.

END_OF_DOCUMENT_TOKEN_TO_BE_REPLACED 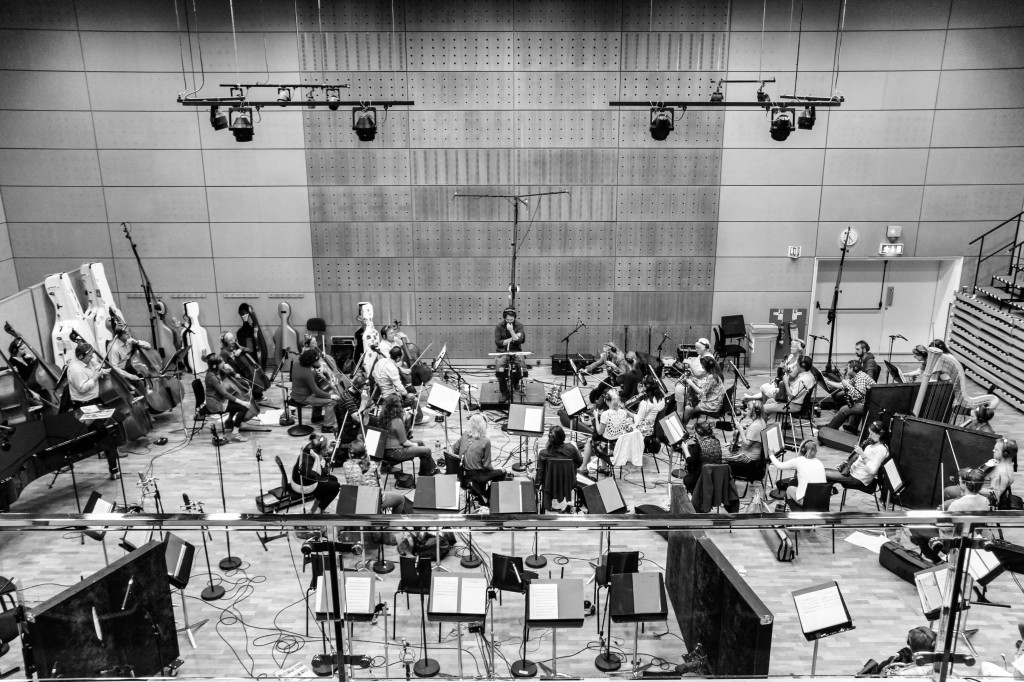 Whether you’re applying for a conducting position with a professional ensemble, a graduate program or a summer festival you’re going to need to produce a high-quality video recording.  You can Google “how to make a good conducting video” but the results are…well, you know, not that helpful.

Let’s start with the end goal:  You need 20-30 minutes of total footage, at least 10-15 minutes of rehearsal footage, and  15-20+ minutes of performance footage. The application verbiage goes on with the attributes the ideal candidate should possess, but no one tells us how to make this video.  It’s like we should just know…so here it goes:

END_OF_DOCUMENT_TOKEN_TO_BE_REPLACED

Do you remember the first time you encountered a quintuplet?  I was practicing a solo in high school that was far too difficult for me, and I encountered this passage:

I remember feeling so proud of myself, wiggling my fingers and aiming for the next beat.  “Wow – listen to all those notes I just played…sort of…”

Fast forward almost twenty years: I found myself working with a student orchestra on Brahms’ Academic Festival Overture, and we got to this passage: 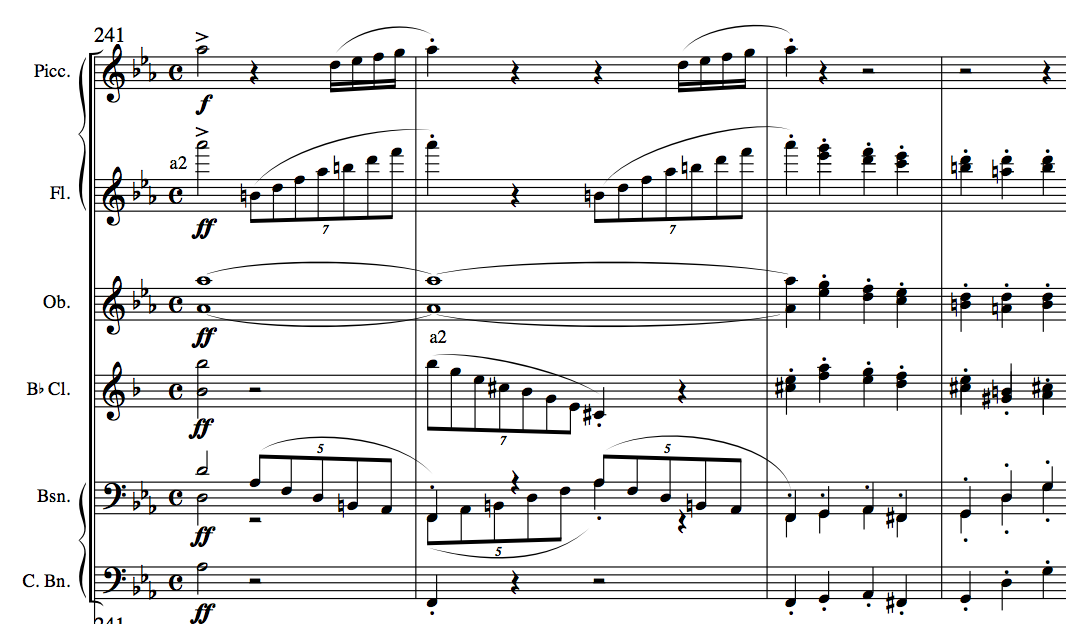 Now, these were very bright college students I was working with, but what do you think they did?  They wiggled their fingers and aimed for the next beat.

Things elsewhere in the overture were going well, so I chose to dig into the details and spend some time on this passage so we could hear the each tuplet cleary, and once we achieved that clarity, we could then hear the resulting polyrhythm.

The root of the problem was that there was a lack of evenness within each tuplet, resulting in the next measure arriving asynchronously.  My first instinct was to give students words with syllables that corresponded to the 5s and 7s: I taught university for 5s and barbeque potato chip for 7s.

Well, hooray it worked.  We achieved evenness, but did I actually teach the students how tuplets are structured?  Not at that moment, but that’s what I’m going to do now…

END_OF_DOCUMENT_TOKEN_TO_BE_REPLACED

So you want to be a conductor?  You’re crazy – stop now, and go on enjoying your life.  Psshh, conducting…why would you want to do that?

Oh, you’re still here?  Good for you.  You must love music as much as life, itself.  You’ve probably played under the batons of great conductors and been inspired by their musicianship, imagination, aural acuity and artistic vision.  Or perhaps you’ve played under the baton of too many poor conductors – those that waste time, talk too much, are inefficient and uninspiring.

END_OF_DOCUMENT_TOKEN_TO_BE_REPLACED

A milestone in the life of any DMA student – the lecture recital.  This combines everything I love about being a musician: engaging with great music, greater people, having the opportunity to teach and learn and using technology to bring it all together.

Modest Mussorgsky’s Pictures at an Exhibition (1874) for solo piano is widely known to audiences through Ravel’s orchestration, commissioned by Serge Koussevitzky in 1922. Ravel’s version is, however, only one of 38 published orchestrations for the symphony orchestra (and one of over 300 hundred arrangements for various ensembles).

In a lecture recital I will discuss the complicated history of this orchestral pillar and Eastman’s Philharmonia will bring these Pictures to life with performance examples from orchestrations by Maurice Ravel (1922), Sergei Gorchakov (1954) and Leonard Lawrence (1977), along with excerpts from the original piano score.

Add the event to your Google calendar

or add the see the details through your Facebook events here. 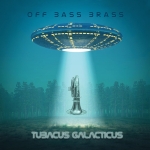 My favorite part about being a musician is being surrounded by some of the most wonderful, creative and thoughtful people on the planet.  Tubacus Galacticus shatters the ‘norm’ of what one would expect from a tuba-euphonium quartet, and pushes the ceiling higher on what we can expect as chamber music moves forward in the 21st century.

From their inception in 2004, Off Bass Brass has taken the idiom of Tuba/Euphonium Quartet in a different direction. By incorporating a rhythm section from the outset, the quartet has transformed into a septet. This collaboration has widened the available palette for many new original compositions as well as jazz, rock, fusion, latin, and big band arrangements that the members of Off Bass Brass have done in-house. This album features world premiere performances as well as some greatest hits from the past decade. The rhythm section has been an integral part of this effort, and is featured prominently throughout the project. The last 10 years have been a fruitful musical journey for Off Bass Brass, and Tubacus Galacticus is the embodiment of that journey.

Here’s more information about each track from the liner notes:   END_OF_DOCUMENT_TOKEN_TO_BE_REPLACED