French composer Nicolas Bacri (b. 1961) is no stranger to Eastman, nor Eastman’s world-renown viola studio. In 2012, Eastman hosted the International Viola Congress and performed Bacri’s music. Bacri was in attendance, and was so impressed with what he heard that he approached The Eastman Viola Ensemble and asked if they would be interested in collaborating on a work for viola solo and viola ensemble. The Piccolo Concerto Notturno is the result of a co-commission between Eastman and the Paris Conservatory. 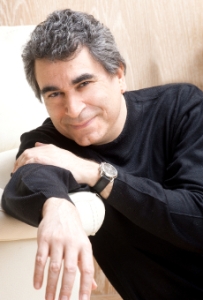 Alex McLaughlin, a sophomore student of Professor Carol Rodland, was the featured soloist alongside yours truly as the conductor.

“When I first started work on the Bacri, I had a sort of “musician’s block”; I didn’t exactly know where to even begin, or even what to begin with. I had experience on learning new pieces of music, but all of them had been freshly composed short pieces with the guidance of their composers for a world premier of around thirty or forty people. Until I met back up with Prof. Rodland and Prof. Irvine at the Bowdoin International Music Festival this past summer, I was totally on my own with essentially only the tools and techniques I’ve learned over the years.

The amount of freedom I had with the piece was actually paralyzing me from getting any quality work done on it. Leading up to Bowdoin, the concerto was essentially small, related fragments that weren’t really all that well held together. It was at Bowdoin that I truly began to develop the fragments into something more convincing: more like a full work of art.

In my lessons, the relationship between teacher and student became less of me getting directions on how to approach the concerto and more of my teachers providing suggestions and ideas and working me directly and arguably more as a professional.

Those six weeks of intensive work on the Bacri not only helped me really develop my interpretation of the concerto but also my mindset as a musician. Musically, I had reached a higher plane of understanding: my mind was constantly in motion while playing, continuously searching for things in the music to bring out; melodies, intervals, phrases, everything. I was now able to fully embrace the freedom that previously constricted me and play the concerto for what it was: a complex work for viola.

The last couple weeks leading up to the competition were both an incredible learning experience and a time of stress. Being able to listen to all the different (and I do emphasize “different”) yet equally convincing renditions of the concerto immersed me into the piece once again, hearing new aspects of the piece I had studied so hard that were previously unknown to me.

Unfortunately as a result of this, I became more doubtful of my own interpretation, making me feel as though I was still so far from reaching the true potential I knew the concerto had. So, I was inspired to really take a fine-tooth comb to the work and give it the final touches that made it that much more complete.

In all honesty, winning the competition was trivial in comparison to the journey this piece was. As a musician, I have matured so much in a relatively short amount of time and have been given a new fire that is motivating to really give the Bacri everything I have to offer and more.

I am truly excited to share this magnificent work to the American audience.”

Click here to read the article on Eastman’s blog.

“First in Flight” is Maestro Studios and Records’ first commercial album to be produced, edited, mixed and mastered by Peter J. Folliard.

Under the direction of Brian Meixner, the North Carolina Brass Band is a British-style brass band and is composed of the finest brass players and percussionists in the state of North Carolina. Their debut album, “First in Flight” showcases a wide variety of musical styles including transcriptions of music for orchestra, wind band, chorus, jazz band and some exciting original music written specifically for brass band.

Here’s a sample of the title track, “Flight”  …

Each week I’ve had a video editing assignment for my “Music Video Editing with Final Cut Pro X” class and this week’s assignment was to create the story of a bride and a groom getting ready for their big day–editing the footage along to the song “We Are In Love” by Harry Connick Jr.
I was expecting to be editing some home movie footage of the bride dancing with grandpa, but when I opened up the footage I was pleasantly surprised. Hope you enjoy it!

I had a great time putting this together – it’s good to be combining the role of performer, producer and engineer!

I thought I’d share some ideas on recording that crossed my mind while preparing and putting this little example together:

First thing first, preparation!!  I wasted my own recording time with some poor execution in the recording.  It was another reminder that preparation on behalf of the performer is a most (the most, IMHO) crucial element to a productive session.

Secondly, it’s important that the performer(s) and producer have a concept of how and where they want every element to sound in the mix.  What do I mean by that?  In classical music, we’re used to hearing a recording that sounds like the stage looks – violins on the left, basses on the right, etc.  Also, what does the perfect violin sound like in your head?  Sometimes we need to move the player and/or the microphone to achieve that sonic goal.

In a studio recording, many times with musicians isolated from one another, or perhaps recording at separate times (overdubbing), there is much more freedom to place the sound wherever the performer(s)/producer desires.

END_OF_DOCUMENT_TOKEN_TO_BE_REPLACED

A story about my experience listening to Shostakovich’s Symphony No. 6 at Chiptole (told through my experiment with some newly learned multimedia skills). 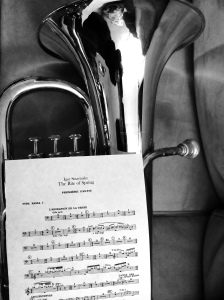 I remember attending a lecture recital during my time at North Texas given by Jeff Cottrell where, among other topics, he discussed symphonic literature and recommended the use of the euphonium in place of older instruments like the ophicleide, serpent and cimbasso.

I remember thinking, “Duh?!  Why wouldn’t a conductor choose to substitute these outdated instruments for their technologically advanced great-grand children?”  Nevertheless, I’ve rarely seen or heard of it.

Euphoniumists might get a call for Holst’s The Planets, Strauss’ Ein Heldenleben or Bydlo from Ravel’s orchestration of Mussorgsky’s Pictures at an Exhibition, but it is rare to get asked to perform a part that would be better suited for the euphonium, (even though the part wasn’t explicitly scored for the euphonium).

Charles Ellis, a former euphoniumist with the Army Field Band, will be conducting Stravinsky’s Rite of Spring and has requested that a euphonium double the Tuba 1 part, and play the parts designated for Tenor Tuba in the Horn VII and VIII parts.  I guess it takes one to know one!!

Come check out the concert…I’ll also be playing bass trumpet!

END_OF_DOCUMENT_TOKEN_TO_BE_REPLACED

So I’m in week 3 of my first round of courses with the Berklee College of Music and I’m learning some GREAT stuff that I wish was covered in a ‘classical’ music curriculum.  Well…maybe some of it was (North Texas’ required acoustics class

)  but I’m much more engaged and eager to learn about this now.

One of the courses I’m taking is called Critical Listening – a course I thought I surely did not need…WRONG!  In only its first few weeks we’ve discussed some very important aspects of the phenomenon of sound and how we perceive it.  The primary focus has been examining our own listening spaces and equipment and putting thought into making it an optimal studio environment.

This week we’re discussing acoustic solutions to adjust to our listening environment’s frequency inadequacies and there are lots of recommendations on what to do and where to purchase absorption/diffusive materials.

However, this link I found particularly interesting Studios of Pop Artists.  Check out the studios setups of artists like Jay-Z, Alicia Keys — pretty awesome. 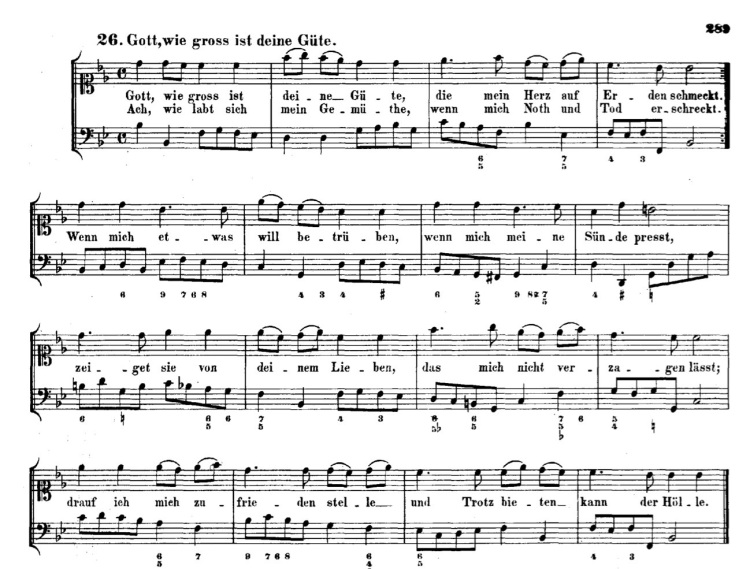 I prefer Bach counterpoint over crosswords any day of the week!

Once you finish composing inner voices (or if you just want to skip that) you’re sure to enjoy this:

We hope you’ve enjoyed our “12 Days of Christmas” as much as we enjoyed making it for you!  Below is the complete playlist (including our two bonus Hanukkah selections)…put this playlist on repeat all day, and come back to enjoy it every holiday season!  Happy Holidays!!