Do you remember the first time you encountered a quintuplet?  I was practicing a solo in high school that was far too difficult for me, and I encountered this passage:

I remember feeling so proud of myself, wiggling my fingers and aiming for the next beat.  “Wow – listen to all those notes I just played…sort of…”

Fast forward almost twenty years: I found myself working with a student orchestra on Brahms’ Academic Festival Overture, and we got to this passage: 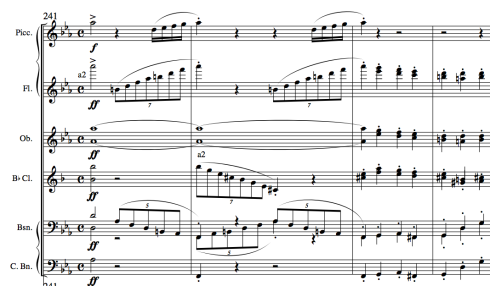 Now, these were very bright college students I was working with, but what do you think they did?  They wiggled their fingers and aimed for the next beat.

Things elsewhere in the overture were going well, so I chose to dig into the details and spend some time on this passage so we could hear the each tuplet cleary, and once we achieved that clarity, we could then hear the resulting polyrhythm.

The root of the problem was that there was a lack of evenness within each tuplet, resulting in the next measure arriving asynchronously.  My first instinct was to give students words with syllables that corresponded to the 5s and 7s: I taught university for 5s and barbeque potato chip for 7s.

Well, hooray it worked.  We achieved evenness, but did I actually teach the students how tuplets are structured?  Not at that moment, but that’s what I’m going to do now…

What happens if you’re in 3/4 time, the tempo is 60 bpm, the eighth note gets the beat, and you’ve got to play 4 quarter notes in that measure with someone on the other side of the stage?

These syllabic solutions are no longer sufficient.  For example, if we say “One – tri  – plet” or “tri-poh-let” for a triplet

we often cheat the true rhythm by approximating it, and the approximation ends up better resembling the rhumba figure:

The best way to understand and execute rhythm, and therefore tuplets, is to rely on mathematics.

A quick definition: a tuplet is “any rhythm that involves dividing the beat into a number of equal subdivisons from that usually permitted by the time signature.” (Carl Humpheries, The Piano Handbook. San Francisco: Backbeat Books, 2002.)

The most common tuplet is the triplet: 3x sounds over the same duration as 2x, where x = any rhythmic value.  Notationally, this is represented:

Composers may also write 3:2, meaning 3 against 2

Subdividing tuplets is identical to our normal method of subdivision:

For every eighth note, there are two sixteenths; for every quarter, two eighths, etc.

It is worth noting that when subdividing tuplets, the counting scheme can feel a little contrary (ONE two THREE one TWO three; or ONE tri PLET two TRI plet).  You’ve just got to get used to that…

3:2 — what is the least common multiple between 3 and 2?  The answer is of course 6.  How does this relate to rhythm?  If we divide a beat into 6 equal parts, we have created a foundation where the 3 and 2 can cognitively coexist.

Do you see the vertical alignment of the triplets with their subdivision?  And do you see the alignment of the duple rhythms with the sextuplet subdivisions?  This is the key to polyrhythms – when the tuplet sounds against the regular beat, the resulting rhythm invokes another rhythmic plane – we begin to hear a ‘common plane of subdivision’ for both the regular beat and the tuplet – that plane may not always be audible, but it does exist!

If anyone is lost, here is another way to conceptualize the tuplet.  In 4:3, think about the math: 4 x 3 = 12, we group a set of 4 units a total of three times.  That’s how the subdivisions are beamed above.

Unfortunately, my eyes and brain have become conditioned to correlating 3-note with triplets, so I need to think of the 4 groups of 3 like this:

And if were we to skip the notation but go straight to understanding – 7:2

The least common multiple is 14, subdivided as 2 sets of 7, or seven sets of 2 within the given time:

Now that you get it, here’s one more way to think of it, without thinking about the least common multiple, and we’ll use that same 7:2 as an example.  If we divide each unit within the 2s into groups of 7, then only play every 2nd note, you’ve done the exact same thing.

In other words, to play x against y, divide the y’s into groups of x‘s and play every yth one.

This is the same concept as the least common multiple, just presented differently.

Also — because this is math, if we’re given 8:12, don’t forget to reduce the ratio by finding the greatest common factor – in this case, 4.  8:12 has the same common plane of subdivision as 2:3.

Admittedly, there are times where the math just isn’t practical.  Here’s one measure from Stravinsky’s Le sacre du printemps, 2 before Rehearsal 40: “Ritual of Abduction.”

How can we decide if the math isn’t practical?  Well, musical intuition should help – this line is scored for flutes and soli violins, and Stravinsky wrote “glissando” for the violins…so this is essentially a written out effect.  However, we don’t need to go do score study to admit the reality, “Hey, I can’t count 45 groups of 2 in less than one second!”

This is where those syllabic devices can help, or we can try and feel the bar in one and play 3 groups of 3, or we can approximate by playing two sets of quintuplets that drag eversomuch.

Get creative, and work at it!  The goal should be evenness, and the downbeat of the next measure must arrive together.

To come full circle, let’s reconsider the original Brahms example – is it important to get even 7s and 5s against the duple meter for that passage?  I don’t know…there’s certainly bigger fish to fry in that overture.

Whatever it’s worth, Brahms’ two-handed piano edition does have polyrhythms in that passage (straight septuplets in the Primo and an alternation of septuplets and 32nd notes in the Secundo), so while this is an effect, Brahms was consistent in creating a polyrhythm.